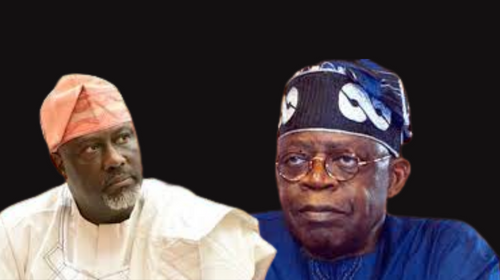 A group, under the auspices of Social Rehabilitation Gruppe has condemned the action of a Peoples Democratic Party chieftain, Dino Melaye, at the campaign rally of the party in Asaba, the Delta State capital.

The group alleged that Melaye dancing and falling on the podium during the rally, was mocking the health condition of the All Progressives Congress presidential candidate,  Asiwaju Bola Tinubu, describing Melaye’s action as a show of shame.

This was contained in a statement issued by the National Coordinator and Convener of the group Dr Marindoti Oludare on Wednesday.

In the statement, Oludare  advised Nigerians to ignore the PDP chieftain’s action, saying it was appalling for the PDP to be making jest of people living with health conditions.

He said, “I just saw a video of PDP making jest of Asiwaju’s health condition. We all know brother Dino didn’t know better. But the vice-presidential candidate of the PDP, Governor Tambuwal, Dr. Andy Uba and other PDP stalwarts found this show of shame amusing.

“This shows that PDP is a travesty of a party. These are a bunch of crass ass politicians. They feel it’s right to make jest of people living with health conditions.

“There are Nigerians whose fathers, mothers, children have died of stroke. Two of my friends last year had heart attack. Two have had stroke that they recovered from, and they are in their mid-30s.

“But PDP feels the pains and suffering of these people with medical conditions are amusing. They are amused with people with polio, people with cerebral palsy, people with tremor. They think it’s funny.”

Oludare, a medical doctor, however noted that the APC presidential candidate is mentally stable and capable of ruling Nigeria “to deliver on his robust ideas of bringing about a new Nigeria.”

He also expressed the conviction that Tinubu, if elected, would transform Nigeria’s health sector as he demonstrated when he was governor of Lagos State.