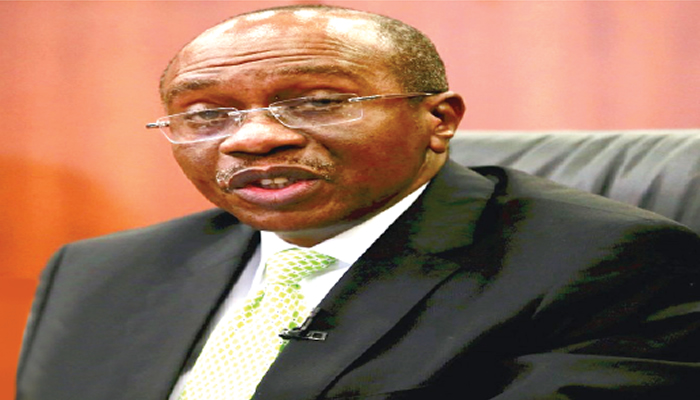 Controversy has surrounded the presence of a team of policemen at the Federal Capital Territory home of the Central Bank of Nigeria Governor, Godwin Emefiele.

The armed police officers, numbering over 10, were seen by our correspondent around 8.40pm, Tuesday, at the Maitama, Abuja home of the embattled governor of the apex bank.

A credible source in the Nigeria Police Force told our correspondent that the presence of the policemen was in furtherance to Emefiele’s expected appearance at the Federal High Court in Abuja on Wednesday (today) over a $53m judgment debt arising from the Paris Club refund.

The source said, “The police officers are not there to arrest, but to ensure that he doesn’t run away again as he did weeks ago.”

The PUNCH,  as of the time of filing this report, could not independently verify if the policemen were at the house to provide enhanced security for the CBN governor or to ensure he attended the court sitting as claimed.

The Force Public Relations Officer, Olumuyiwa Adejobi, said, “I have no knowledge of such an event. However, kindly contact the FCT command.”

The FCT PPRO, Josephine Adeh, also denied knowledge of the incident when contacted by our correspondent.

Adeh said, “I don’t know anything about policemen surrounding the CBN governor’s home. You could contact the force headquarters.”

Earlier, a Federal High Court in Abuja had summoned Emefiele over the $53m judgment debt arising from the Paris Club refund.

In an application for garnishee made on October 20, 2022, Justice Inyang Ekwo ordered the CBN governor to appear on Wednesday, January 18, 2023, as the hearing date for the matter.

Prior to this, on January 23, 2020, the court ruled that Emefiele must appear “to be examined on oath touching the means you have or have had, since the date of the said garnishee order absolute, to pay the balance of $53m now due and payable under the said garnishee order absolute and also show cause why you should not be committed to prison for default in payment of the said sum.”

The order followed an  application by Joe Agi (SAN) against Linas International Limited, the Minister of Finance, and the CBN through his lawyers, Isaac Ekpa and Chinonso Obasi.

The applicants are seeking an order directing the Inspector-General of Police to arrest Emefiele and bring him to court, alongside his lawyers — Damian Dodo, Audu Anuga, all Senior Advocates of Nigeria, and Ginika Ezeoke, Jessica Iyoke, Abdullahi Afolayan and Olayemi Afolayan.

The suit stemmed from an alleged $70m judgment against Linas over the lawyer’s services in the Paris Club refund.

The CBN governor was said to have left an outstanding amount of $53m having only released $17m.

Commenting on the development, a lawyer, Deji Ajare, said the police could compel Emefiele to appear in court based on a court order.

“The police have the constitutional powers to arrest and bring a person to court. They can also enforce the order of the court compelling the appearance of a person or official in court,” he stated.

Meanwhile, the Department of State Services reportedly grilled CBN deputy governors on Monday in connection with an audit.

However, the DSS spokesman, Peter Afunanya, said, “ This particular  enquiry is very distracting. What are the names of those taken away? What was the vehicle number that was used?

“Meanwhile, the DSS remains professional,  focused and will always discharge its mandate with utmost due diligence, rule of law and tenets of democracy.”

Also, the DSS spokesperson had yet to respond to a WhatsApp message seeking to confirm the secret service agency’s involvement in the police presence at the CBN governor’s residence, as of the time of filing this report.

Meanwhile, the battle between the CBN governor and the DSS over a plan to arrest him appeared to have been put on hold as Emefiele  resumed duty on Monday.

He resumed at the central bank headquarters in Abuja after spending several weeks in the United Kingdom and the United States following reported plots by the DSS to arrest him.

In a statement by the CBN Director of Corporate Communications, Mr Osita Nwanisobi, the apex bank said the governor resumed work amid concerns over his absence since last month.

The DSS on Monday also denied invading the CBN head office in Abuja.

This followed reports in some media outlets (not The PUNCH) that the DSS had stormed the CBN headquarters to arrest the governor of the apex bank.

In a statement on Monday by the DSS Public Relations Officer, Peter Afunanya, the agency denied arresting Emefiele.

However, the development appeared to have put a temporary stop to the reported plot by the DSS to arrest the nation’s number one banker.

Emefiele, perhaps the most embattled and controversial CBN governor in the recent history of the country, left the country last month after the secret service agency approached an Abuja court for an order to arrest him over allegations bordering on financing terrorism and money laundering, among others.

However, the Federal High Court sitting in Abuja refused to grant the DSS application.

The DSS had filed a suit on December 7, 2022, seeking to arrest the CBN governor. But Justice J.T  Tsoho declined to grant the application for the governor’s arrest on December 9, 2022.

The suit, with reference number FHC/Abj/CS/2255/2022, had State Security Services as the applicant.

Refusing to grant the DSS request, the judge said, “In the light of the foregoing reasons, I decline to grant this application ex parte. If the applicant believes that the evidence available to it so far is sufficient, then it can as well arrest and detain the applicant, even without the order of the court. If, however, the applicant desires to still pursue this application, then it should place the respondent on notice considering the sensitive public office that he occupies.”

Also, the High Court of the Federal Capital Territory, on December 29, barred the DSS and the Inspector General of Police from arresting and detaining Emefiele, over allegations of terrorism and sundry offences against him.

Meanwhile, the court has ordered an accelerated hearing in the matter and abridged the time of both the respondents and the applicant.