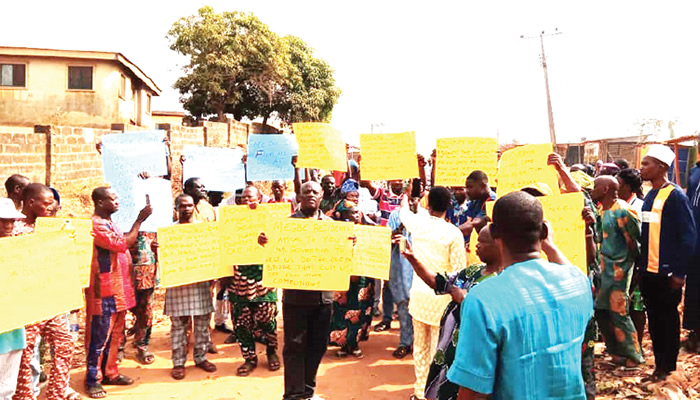 Some communities in the Obafemi Owode Local Government Area of Ogun State have lamented the collapse of a bridge reportedly constructed during the colonial era which connects them to the rest of the state.

According to the residents, the Oke Ipa Bridge, which collapsed on July 7, 2022, due to torrential rainfall, has hampered commercial activities, as farmers, traders and other business owners have not been able to function well.

Our correspondent, who visited the scene of the incident, saw a makeshift bridge constructed by residents to allow the passage of humans and motorcycles only.

During a peaceful protest on Saturday, the residents called on the state Governor, Dapo Abiodun, to come to their aid, saying the makeshift bridge would not withstand the coming rainy season.

The residents carried placards with different inscriptions, including, ‘Please, come to our aid, Governor Dapo Abiodun,’ ‘The bridge is important to our children’s education,’ ‘Help us fix the Oke Ipa bridge that has cut us off from other communities,’ among others.

The Baale of Melegun Oke Ipa, Chief Wahab Shodipo, said a new bridge would allow free flow of traffic in and out of the communities.

A chief of Igbehin land, Oluwole Olaoye, noted that a new bridge would also decongest traffic on the Lagos-Ibadan Expressway.

“I was born in the 50s; I met the bridge here. Then, I was schooling at Pakuro. We used to come here to swim. The bridge that collapsed was not constructed by the government but by white men who came to explore gold in the time of our forefathers. Since its collapse, we have not had any government intervention,” he added.

A community development chairman, Samuel Babalola, said the construction of a new bridge would not cost more than N10m.

“What is N10m to the government? We are pleading with Governor Dapo Abiodun to come to our aid,” he added.

The Vice Chairman, Pakuro Community Development Association, Olatokunbo Odediya, said, “Since this bridge collapsed, economic and academic activities have collapsed. We had to construct a makeshift bridge to have access to the Mowe Market.”

The Pakuro CDA Chairman, Olufemi Omoloso, said the state government claimed to have approved the reconstruction of the bridge.

“However, they keep talking about financial problems,” he added.

The Chairman, Obafemi Owode LGA, Ogunsola Adesina, said he was not aware of the collapse of the bridge.

He said, “They have yet to inform the local government about the situation.”

Efforts to reach the state Commissioner for Works, Ade Akinsanya, proved abortive, as he did not respond to calls and a text message put across to his telephone as of press time.