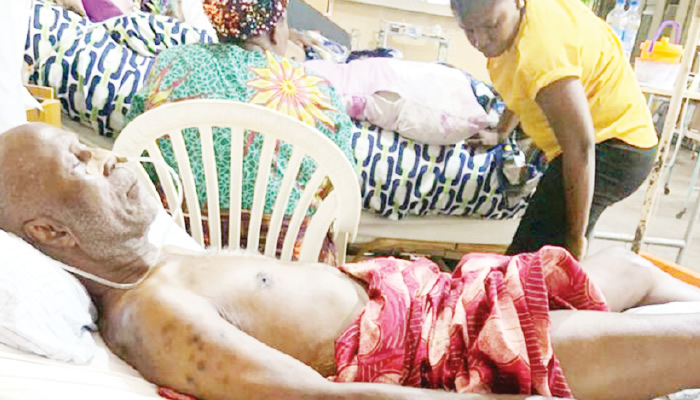 • U-17 World Cup winning coach on life support in Benin

U-17 World Cup-winning coach, Sebastian Brodericks-Imasuen, is currently on life support at the University of Benin Teaching Hospital, The PUNCH reports.

Brodericks-Imasuen, 84, who led the Golden Eaglets to win the inaugural U-17 World Cup in 1985, had been diagnosed with Ischemic stroke since December 2022 and has been receiving treatment at the UBTH for over a month, our correspondent gathered.

Ischemic stroke occurs when a blood clot blocks or narrows an artery leading to the brain. The blood clot often forms in arteries damaged by the buildup of plaques (atherosclerosis).

Brodericks-Imasuen’s son Chuka told The PUNCH that his father was currently on oxygen and battling to survive.

He added that the family paid N42,000 daily for oxygen and other medication their father needed to stay alive.

Our correspondent learnt that the family had spent over N1.2m since Brodericks-Imasuen was hospitalised.

“My father has been in and out of the hospital since last year, but for the past one month, he was hospitalised at the University of Benin Teaching Hospital after suffering Ischemic stroke,” Chuka told The PUNCH.

“He has been managing diabetics as well, but now the stroke is the major concern as he has totally lost all motor functions as we speak. He can’t work, speak or hear anybody. He has a tube to feed with and he is currently on oxygen.

“He underwent an MRI scan, which showed that he also suffered brain atrophy complications as well. He has a reduced size in his brain and he is more or less not here.

“It has not been easy for the family having to pay for the oxygen daily, his insulin injections and his feeding, which the hospital provides.

“The hospital feeds him and so far they have not told us what we’ve incurred as regards his feeding for over a month now because he is not allowed to eat what we bring for him after he was diagnosed with diabetes. So, the dietician recommends what he takes because it has to be blended.

Chuka added that the Edo State Government, the sports ministry and the Nigeria Football Federation were yet to come to their father’s aid despite contacting them.

“Nobody has reached out to us from the state government, the NFF or the sports ministry, since we contacted them but by the grace of God we are doing our best to keep him alive,” he added.

“I had to abandon my job in Lagos to come down to Benin and stay with my father at the hospital.”