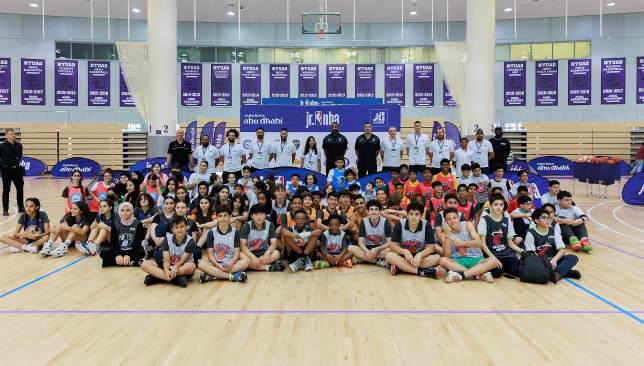 HE Mohamed Khalifa Al Mubarak, Chairman of DCT Abu Dhabi said: “Abu Dhabi is contributing to the growth of global youth basketball as we inspire our youth to get active and enrich their lives with respect, teamwork and values of the game.  It is a joy to witness the grassroots passion and excitement among our youth players that can only fuel more interest in sports and pave the way for a new generation of home-grown sporting talent, inspired by the Jr. NBA and the many sports initiatives across Abu Dhabi.”

“We are thrilled to expand the Jr. NBA Abu Dhabi League in partnership with DCT Abu Dhabi to provide more Emirati youth with the opportunity to learn the fundamentals and core values of the game,” said Rivera.  “Interest from local schools has been phenomenal, so we are encouraged that the program has already doubled in size and will only continue to grow and provide youth players and coaches with greater access to the sport.”

“It was so much fun to engage with the youth teams taking part in the second Jr. NBA Abu Dhabi League and witness their excitement for the upcoming season,” said McGrady.  “Basketball is a global sport that transcends countries and cultures, and I’m thankful to have played a role in helping grow the game here in Abu Dhabi.”

McGrady, a 15-year NBA veteran who retired from the league in 2013, is a seven-time NBA All-Star, seven-time All-NBA selection, two-time NBA scoring champion, winner of the NBA Most Improved Player award in 2001 and was inducted into the Naismith Memorial Basketball Hall of Fame in 2017.

Scola, a native of Argentina, currently serves as the CEO of Italian Lega Basket Serie A team Pallacanestro Varese.  He signed with the Houston Rockets in 2007 and was voted to the NBA All-Rookie First Team, before going on to play for the Phoenix Suns, Indiana Pacers, Toronto Raptors and Brooklyn Nets over his decade-long NBA career.

The Jr. NBA is the league’s global youth basketball programme for boys and girls, teaching the fundamental skills and core values of the game – teamwork, respect, determination and community – at the grassroots level in an effort to help grow and improve the youth basketball experience for players, coaches and parents.  The Jr. NBA Abu Dhabi League aims to promote the values of the game and encourage youth to lead an active and healthy lifestyle through participation in sport.  During the 2022-23 season, the Jr. NBA will run 111 leagues in Europe and the Middle East that will collectively reach nearly 50,000 youth in 28 countries.

The partnership also sees DCT Abu Dhabi, under “Experience Abu Dhabi,” the tourism promotion initiative of the UAE’s capital, serve as the Official Tourism Destination Partner of the NBA in the Middle East, North Africa, Europe and China.