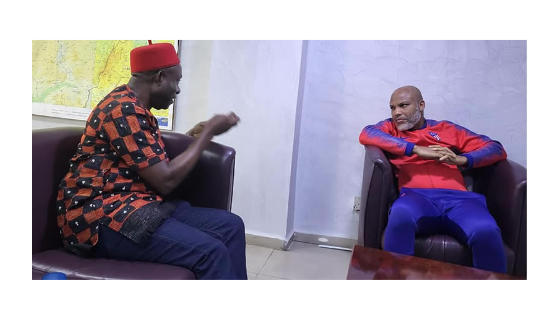 The detained leader of the Indigenous People of Biafra, Nnamdi Kanu, has lauded the Governor of Anambra State, Prof Chukwuma Soludo, for calling for his release.

According to one of Kanu’s counsel, Aloy Ejimakor, who visited him on Monday, the IPOB leader while conveying his appreciation, also disclosed that his nutrition and medicals had been poor.

“UPDATE: I just concluded a visitation with #MNK. He directed me to publicly convey his appreciation to Governor Chukwuma Soludo for the political courage he displayed by demanding his unconditional release. On a sad note, he told me that his nutrition & medicals remain erratic,” Ejimakor tweeted.

Soludo had called for the release of Kanu, who has been in detention since 2021.

Soludo made the demand in Awka, the state capital, during the campaign kick-off of the All Progressives Grand Alliance on Saturday.

He said, “I am making a passionate appeal to the Federal Government to release Mazi Nnamdi Kanu unconditionally. If he cannot be released unconditionally, I want him released to me and i will stand surety for him.

The Court of Appeal sitting in Abuja had, on Thursday, October 13, 2022, freed and discharged Kanu, declaring as illegal and unlawful, his abduction from Kenya to Nigeria and quashed the entire terrorism charges brought against him by the FG.

The appellate court held that the Federal Government breached all local and international laws in the forceful rendition of Kanu to Nigeria thereby making the terrorism charges against him incompetent and unlawful.

Meanwhile, the Federal Government, through the Attorney General of the Federation and Minister of Justice, Abubakar Malami, in a swift reaction to the discharge of Kanu had said Kanu was only discharged but not acquitted.

Sequel to this, the Federal Government went on to appeal the Court of Appeal’s judgement freeing Kanu and discharging him of all offences, seeking a stay of execution.

The appellate court, after hearing the FG’s fresh suit, granted a stay of execution of the discharging of Kanu, a ruling which the IPOB legal team had since appealed before the Supreme Court.

As of the time of filing this report, the leader of the proscribed IPOB had yet to be released from detention.