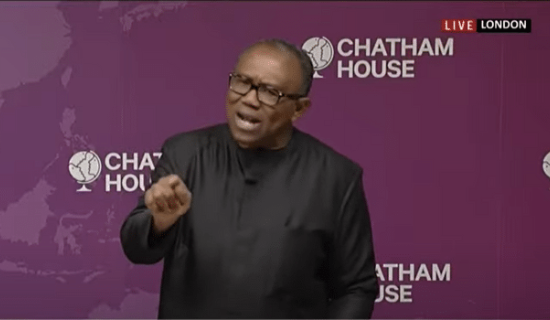 …Says he will dismantle Nigeria’s structure of criminality

The presidential candidate of the Labour Party, Peter Obi, has said he will declare war on the power sector if elected president in the forthcoming February election.

Obi said this on Monday while speaking at the Chatham House in the United Kingdom.

He said, “You have heard them say we don’t have structure, that structure is the one that has dismantled Nigeria. We will destroy that structure of criminality, I assure you of it.

“I have said it that anyone can generate up to 100,000 megawatts with our licence.

“If a country with 60 million population generating over 40,000MW is declaring emergency on power, what do you think somebody with two million people generating 5,000 to 6,000MW will do? War!

“I am going to declare war on power and I will solve it. Anybody who stands on the way, so be it.”