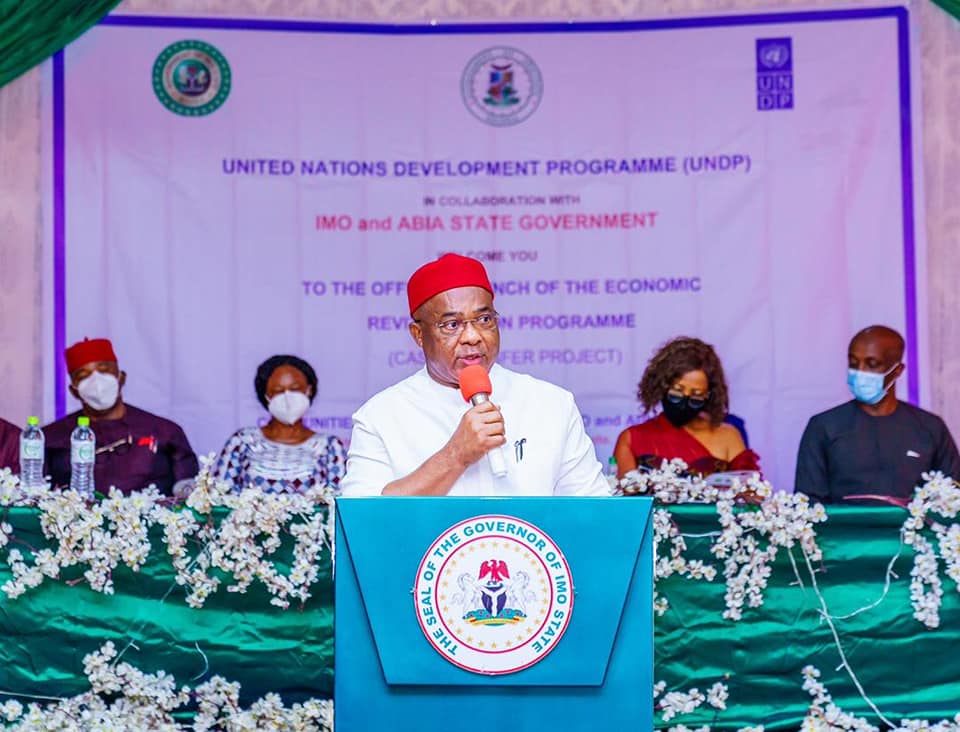 The governor of Imo State, Hope Uzodimma, on Sunday said that he inherited a failed state from his predecessor, Emeka Ihedioha.

Uzodimma in a broadcast in Owerri, the state capital to mark his three years in office, also said that there was no handover note he got on the assumption of office.

He said that the challenges he confronted since taking over power were humongous but he said that he had been able to surmount them.

Uzodimma said that despite the challenges of COVID- 19 pandemic and insecurity which he said is politically motivated, his administration in 36 months had recorded unprecedented achievements.

The governor said that he inherited a failed road network but he had been able to construct uncontactable numbers of quality roads which had attracted the presence of the President, Major-General Muhammadu Buhari (retd.), to the state twice.

He also said that he had given the traditional institution in the state and the judiciary facelifts since he became the governor of the state.

He said “The Imo State we met in January 2020 on the assumption of office can best be described as something very close to the political definition of a failed state, this time at a sub-national level. For all practical purposes, we met a state with a decayed infrastructure, a dysfunctional workforce and a deeply despondent and traumatised populace. There was hardly any single motorable road across the state. The state capital of Owerri, in particular, was littered with unmotorable roads and dilapidated government buildings.

“The Civil Service was a good example of a disoriented and directionless institution with no regard for regulations and due process. As a consequence, the productivity and reputation of the Civil Service dropped to zero. For a state like Imo which was renowned for its efficient and reputable civil service, this collapse was a major dent in our pride and reputation.

“The general populace, dismayed by the inexplicable failure of government, relapsed into utter despondency and hopelessness, like sheep without shepherds.  Yes, the situation was that bad.

“The situation was made worse by the fact that we had no handover note, and there was nobody to ask questions about the government’s assets and liabilities. We were faced with a dead end on arrival. Our situation was worse than talking to the deaf and dumb. It can only be comparable to the ordeal of someone groping in the dark in search of a pin.

“Yes, it was that daunting.  But we refused to be deterred. I am not the one to give excuses for failure. By my election, I had reached a social contract with Ndimo to move our state forward. And that, for me, was a task that must be accomplished.

“To make a very bad situation even worse, it appeared that the god of oddities was temporarily on the throne.  While we were trying to navigate an already messed up ship without a compass, the COVID-19 pandemic reared its ugly head with its negative consequences on the global, national and state economies, in addition to an unprecedented toll on human life.

“As if that was not enough trouble for us, some unrepentant sour political losers vowed to make the state ungovernable for me. And they did not stop at mere threats: They walked their threats by unleashing unbridled violence in the state. It was like hail was let loose and insecurity became the order of the day. Our state which was once admired for its safety, serenity and sanity became a den of criminals.

“Our state was a preferred destination for tourists became a dreaded city as visitors and even indigenes stayed away for fear of becoming victims of the senseless killings, arson and violence that spread across the state. Yes, our take-off was that bad.

“It was bad enough to daunt even the bravest. But we refused to give up. Instead, we summoned courage and confronted all the challenges head-on. I was convinced that this was what the Imo people who chose me over the other candidates expected me to do. Looking back to three years ago, I can beat my chest and say that to a very large extent, we have overcome.

“But I must add that we overcame not because we are the bravest or the wisest but because God is with us, and I know for certain that our faithful God does not abandon his people. I was inspired and strengthened by the verse from the Holy Bible in Joshua chapter 1:9 which says; Be strong and courageous. Do not be frightened or dismayed for the Lord your God is with you wherever you go.”