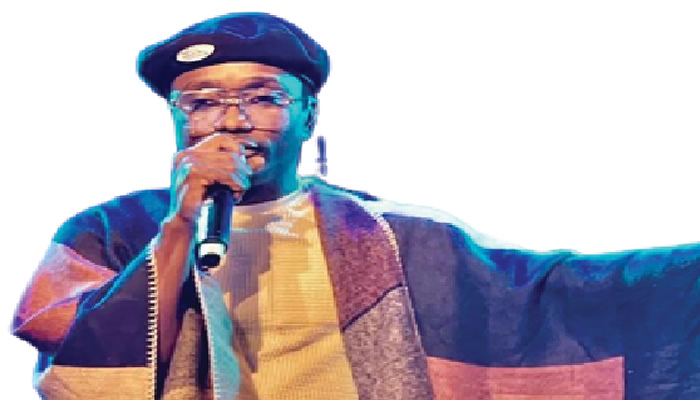 In this Interview with GODFREY GEORGE, singer, Olawale Oloforo, better known as Brymo, addresses issues about his recent anti-Igbo statement, his support for the All Progressives Congress presidential candidate, Bola Tinubu, among other issues

You started your musical career quite early. Did you always know you were going to be a singer?

I wouldn’t say I knew. Let’s just say I was looking at sports and stumbled upon music. Or, maybe, my need for order led me to a profession that lets me contribute to every of its departments. That is the sweetest perk for me working in music.  Also, I am doing the same job that consists of many other jobs.

Your brand of music is one that many have described as ‘highly intellectual and spiritual’. What inspires you?

I prefer the people who say it is ‘highly intellectual’ (laughs). “Spiritual” makes it feel like we are praising God with the music. In truth, what we are doing is asking and answering questions using our music. I am thinking and feeling free on every track and I want to get others to feel the same.  For me, spirituality requires dependence on other-worldly forces for guidance. Intelligence may mean that one will be able to think for oneself while still following guidance.

I am more inspired by my need to use my gift of energy to bless my world before my inherited talents or the influence of my environment. I put my music before means or fame.

You have a lot of hit songs to your name and have sold out a lot of concerts. What do you owe these successes to?

I owe my successes to life. I am living; that is why I do these things in God’s time.

After releasing your first album, Brymstone, in 2007, your music took the world by storm. Has it always been rosy?

Wow! Oh yeah! I remember Brymstone! (Laughs) I remember most of the tracks like ‘Shawdy’. There was also ‘08-’09. Wow! Thanks for the memories! Amazing album! But my journey has not been rosy. Well, we can say it has been fairly rosy but it has been immensely fulfilling.

You left Chocolate City in 2013 on rumours of you breaching the contract with the label. What exactly led to this?

You have released 10 studio albums since your career took off. What keeps you going?

I am inspired by the fact that I can use my gift and energy to bless humanity. I just have to keep going. Adulthood is about many things happening at once and each ‘department’ must be near-mastered when one seeks to perform astutely at daily tasks and be ready to face the outcomes of such decisions.

You openly endorsed the presidential candidate of the All Progressives Congress, Bola Tinubu, and this move was greeted with criticisms. What is your response to this?

My response to them is to wait and let time bring to pass what tomorrow has in store for us all. I believe BAT (Bola Ahmed Tinubu) is the incoming president, and that the polity will be better if he is there. That is it.

Some say celebrities should not be involved in politicking; should this be so?

Yes, largely. This is because the story of a candidate may rub off on us, the celebrities, and leave us abandoned when they may fail or lose. I know you are surprised. But, yes, I am still doing this. I can’t help it.

You recently made some unpalatable comments concerning a particular section of society which, although you have apologised for, many still find quite insulting. What is your reaction to this?

Yes, this is true. I have been said to have crossed the line by pointing at certain individuals yet I was only pointing to patterns that may be in the way of the progress of the South-Eastern region, and by extension, the nation.

Some people say that your recent outbursts may be because you have been financially induced by some politicians. Is this true?

They used to say I was broke when I spoke up like this before. Now,  they are saying I have been ‘activated’?  This is crazy! Well, no. I have not been financially persuaded. I support one of my own choosing!

You are also an author, having released a self-referential novel, Oriri’s Plight. Do you still write?

Oriri’s Plight may have referenced bits of my own story for inspiration yet it is not about me at all. The Bad Tooth, published in 2021, is about me, and you can find ‘verses’ there, too. I’m currently looking to publish more as soon as possible.

As an only child born to a carpenter and a petty trader, what was it like growing up in Lagos?

It was like growing up in the ghetto, I guess. I do not have any other person’s life to compare it to, so I have never wondered what it was like. Some days it was good. On other days, it was bad, fun, or painful. For me, it all just leads here. I’ll know how I feel about it all later, maybe before I pass on.

You used to like football and almost became a professional footballer. What changed?

I don’t know what changed, to be honest. I literally just switched to music, and have found myself following football less and less. I think this may be because I would prefer a more vibrant football scene here, where the best play locally, and not for politics only. I will love to see a local league that can compete globally in both market and quality.

You left the Lagos State University where you were pursuing a Zoology degree to pursue music. Do you have plans of going back to school?

What projects are you currently working on?

I’m currently working on Mansa. It is expected to be in the gallery after its exclusive public exhibition which will come up on March 3, 2023. It’ll be my debut as a ‘sonic-artist’ and only one copy of it will be made. Interested collectors can check it out then, listen to snippets, and maybe, claim the art as theirs. It’ll in an NFT format – a turntable disc, expanded digital and hard copy lyric books and other deliverables.

What do you make of the petition signed by over 100,000 people asking that your nomination for  the upcoming 8th annual All Africa Music Awards be withdrawn?

I was going to be hurt but then I remember that I’m a sonic artist now. Awards are meant for musicians. They don’t concern me anymore; market share does.

You shocked the world when you posted a picture of your son in 2015. How is he doing?

Olarenwaju is his name, and he is doing great. He is seven years old now.

How has fatherhood been for you?

It has been good. Fortunately, sticking around is most of the job there is. Life takes care of my kid!

Some say that you’re weird. Do you agree?

Why would I not be weird? Everyone is normal, and thinking makes it exciting, else the world will be boring as hell; everything will all look and move the same.

It doesn’t appear like you have many friends in the Nigerian music industry. Why is it so?

(Laughs) Fortunately, I didn’t come out here to make friends, I came to create influence.

What is your biggest aspiration as a creative?

[I want to be] the greatest artist to ever live!