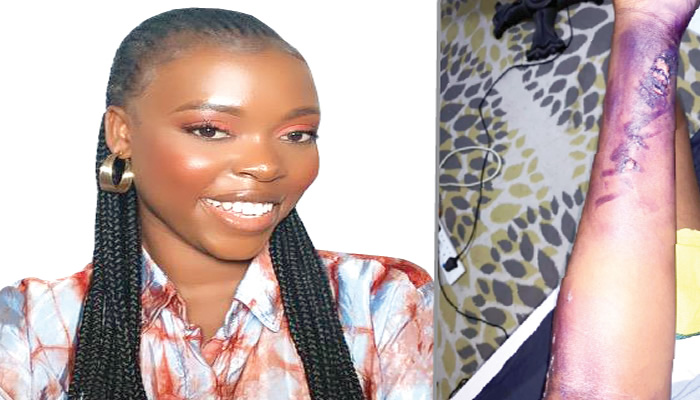 A Lagos- based lady, Yetunde Ogundiya, tells OGHENOVO EGODO-MICHAEL how she survived but with injuries after a live cable from an electricity poll in the Yaba area of Lagos fell on her

Tell us about yourself.

My name is Yetunde Ogundiya. I live in Yaba, Lagos. I am a writer and I also work as a customer care support staff.

You recently had an accident in Lagos. Can you tell us about it?

Around 8am on Monday, January 9, I went out to braid my hair. As I was returning home, I just felt something burning through my body. The burn came with some shivers that passed through my body. Apparently, it was a live wire that fell from an electric pole and immediately it happened, I passed out.

How were you rescued from the unfortunate incident?

When it happened, some people were around and since they knew that I live close by, they called my friend and ordered a ride to take me to a clinic. However, before I got to the hospital, I was given some milk to drink and some first aid treatment.

Where did the accident happen?

It happened around the Abule Ijesha area of Yaba in Lagos State.

How did you feel when it happened or the moment you regained consciousness?

When it happened, I was just crying uncontrollably. It was a very painful experience and the hand that was burnt still hurts till this present moment. I have not been okay since it happened and that was why I called them (electricity company) out via Twitter. Even right now, I am so tired and I cannot move my hand. The pain and the discomfort also come with fever.

Who did you inform when it happened?

I quickly called my parents who came visiting.

After calling the electricity company out on Twitter, was there any response?

Yes, there was a response. They called me and kept apologising and told me they would make sure something like that does not happen again. They also sent a man to come and confirm that this actually happened. He confirmed and he left.

Who sorted the medical bills?

I sorted the medical bills by myself.

Do you have any expectations from the electricity company?

I want them to compensate me for the pain and trauma that they have caused me. They should refund the money for my medical bills, and pay me compensation for the emotional trauma, and everything I am going through right now. I cannot do anything with the hand and I have not been able to work since the incident happened. They need to also make sure the wires are properly connected. It is a scary situation which could lead to loss of one’s life.

Have you considered lodging a formal complaint or writing the electricity company?

Yes, I have considered doing that but I have not done it yet. I intend writing them tomorrow (Saturday, January 13). They reached out to me and came to see my situation already but if nothing is done, I would consider taking a legal action.

Which particular electricity company are we talking about?

It is Ikeja Electricity Distribution Company.

How much did you spend treating yourself?

I do not know the total amount because my friends and other people contributed to the bill.

For how long were you in the hospital?

I spent a night and a day in the hospital.