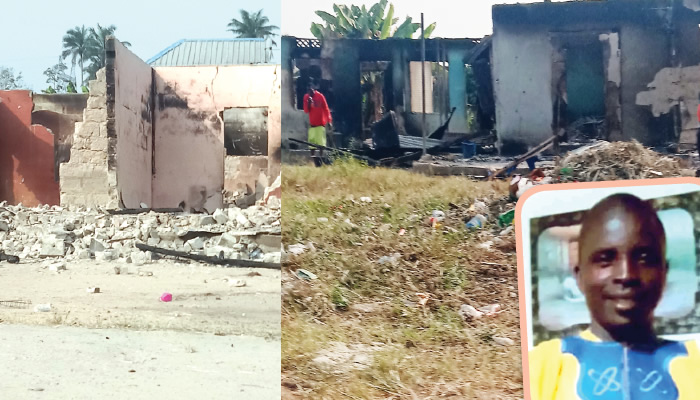 About three people were killed and 30 houses torched after a land tussle between Egborode and Okwijorogu communities in the Okpe Local Government Area of Delta State.

Saturday PUNCH gathered that the land in controversy is located along old Lagos road.

The incident which occurred on New Year’s Eve claimed the life of one Mr Charity Ogbe of the Egborode community and in reprisal; youths from the community burnt several houses in the Okwijorogu community.

In a video shared with our correspondent by a source, Victor Akpenvwe, the lifeless body of Ogbe was seen on the road with sympathisers crying and shouting ‘Okwijorogu no go exist again.’

It was gathered that both communities used to be opposite each other along old Lagos road before the government constructed the new Lagos road which split Egborode community into two.

Akpenvwe told Saturday PUNCH that overtime, the other part on the old Lagos road was occupied by indigenes of Okwijorogu, adding that efforts to reclaim the land had resulted in conflicts between the two communities.

A shop owner along the new lagos road who resides in Egborode, Mrs Cynthia Obie, told our correspondent that over 30 houses including shops were also burnt during the crisis.

Our correspondent observed that some traders and shop owners along the road were chased away and some shops torched.

Speaking further on what transpired between the two communities, Obie said, “I have two shops there and that’s where they started fighting. They were fighting over land because that part was supposed to belong to Egborode but the Okwijorogu people were claiming it. You know that was the old Lagos road before they created a new express road.

“It’s the new road that divides Egborode into two, so Okwijorogu people want to claim the other side where Egborode was divided and Egborode people said it’s not possible and that’s what caused the fight. They have burnt almost all the houses in that village. My prayer is that it doesn’t lead to another thing.’’

On how Ogbe died, she said he was shot when he went to the junction. She stated, “They shot him, and he didn’t know they were carrying a gun. They were just holding sticks and cutlasses; he didn’t know that one of them was holding a gun. As he was going back, they shot him from behind. After shooting him, they attacked him with a mortar.’’

Our correspondent who visited the Egborode community on Sunday, January 1, 2023, spotted vigilantes with guns  and cutlasses searching cars and passengers’ bags at the entrance of the community.

The atmosphere was tense; several shops were under lock and key while people stood at different junctions outside their houses discussing.

A resident, Aisosa Aibangbe, told our correspondent that some residents had fled the community to secure their lives.

He said “My brother, this New Year started on a sad note. I just can’t imagine that the issue will get to this level. Somebody has even died. A lot of people have even run away because of fear.”

Another resident who gave his name only as Ochuko, said some of the residents ran away because they were avoiding hoodlums who could loot their shops.

“In fact, the owner of a drug store packed everything inside her shop and ran to Warri. We are now living in fear,” she added.

She said her husband took their children to her sister living in the state capital immediately after the crisis started, adding that she planned to join them there later.

She said, “I just came to get something from the shop. This issue has been on for a while, but yesterday (New Year’s Eve), it became worst. In fact, my husband went with our children to my sister’s place in Warri. I will be with them later today. My brother, I don’t want to die because of land crisis.’’

Our correspondent also visited the home of one of the victims in Egborode who sustained an injury on his left hand due to the fire in the Okwijorogu community. The victim, however, declined to speak about the matter.

The victim asked our correspondent to go to the community head for any information.

One of the elders in the community, who gave his name simply as Mr Use advised our correspondent to be careful and tread softly on the matter.

He said, “My brother, this is a fight between two horses. You have to watch your movement in this community, especially because of your safety. Some of them don’t know what your work is as a journalist and before you know they will think you are from the government and if they descend on you, that will be your cup of tea”

Efforts to get the community head to speak on the matter were futile as our correspondent had to leave the community for safety as some youth began to inquire about his mission.

Our correspondent who also visited the Okwijorogu community on Sunday observed that many houses were burnt, including the premises of a Redeemed Christian Church of God and Living Faith Church in the area.

Motorcycles and tricycles were also burnt. The once bubbly community has become a shadow of its former self with residents packing their property and fleeing the area.

Some youths were also seen with cutlasses and woods, looting and selling items to scrap collectors who were also picking items seen around.

As of the time of the visit, there were no security agents in the area.

A resident whose house was affected who gave his name simply as Tega, said he could not escape because the incident took him by surprise.

He said, “My wife and I were inside the house when they came and shouted at us to lie down. I was surprised. The whole issue was like a film. They burnt houses in the village. I didn’t expect that this is how we will spend the New Year without a roof over our heads. You can see for yourself they have burnt everywhere.”

Another resident, Lucky Odavwaro, said he was afraid when he saw the type of vehicles brought by some of the people who participated in the fight.

Odavwaro stated, “It was as if it was another world war. They burnt the houses but they didn’t kill people, they only chased them out of their houses. They said they don’t want the people on the land belonging to Egborode again.”

A shop owner, Bright Chijioke said that it was as if the community had become a desert.

He said, “Even if they give one a portion of land in this place, would one take it when one does know what may happen in the next few months? The thing is that this issue has been lingering for a while. But I usually tell people that we didn’t come to this world with anything, and we won’t return with anything. Now they have killed somebody because of land.’’

He claimed that an unidentified man who shot Ogbe was recently released from prison, accusing the person of being the mastermind of the crisis.

Contacted, the state police spokesperson, Edafe Bright, who confirmed the incident, said only one person died and several buildings were burnt.

Bright said, “The incident is confirmed. But the report I have is that one person died. I know some buildings were razed down but for now, I have not got the exact number of houses that were affected. But one person was shot dead by one of the suspects, Ogbeini Otoyon. And the person that was killed is a male, Charity Ogbe.’’

He added that he was waiting for further details from the District Police Officer in the area.

Speaking on the solution to communal crises in the country, a social commentator and Professor of Sociology Education at the University of Port Harcourt, Rivers State, Oledinma Nwanna-Nzewunwa, urged government to be more proactive in providing adequate security to volatile areas.

She said that such crises erupted when there was a disagreement or supremacy over ownership of property.

Nwanna-Nzewunwa noted. “It is usual for people who live together to have misunderstanding but the extent it is happening now in Nigeria needs caution. Some of the causes are ownership of lands and other property as well as power tussles and supremacy.

“Government is doing something about it but it is not doing enough. I believe since the government is aware of the main issues in contention, it should station law enforcement agents closer to volatile areas and be proactive in providing adequate security in those areas. Once the communities are aware of the presence of law enforcement agents in their areas, even though they engage in such acts, it won’t be to an extent where there would be loss of lives and property.

“One of the problems is that politics has done a lot of damages in this regard. Also, there is still a psychological problem where you find out that people engaging in such things have lost sense of humanity. Presently, the most disturbing issues have to do with politics because some people believe when they do anything wrong, there is a godfather to secure their bail.’’

Also, speaking on efforts of the Delta State government in curbing crises among communities, the state Commissioner for Information, Charles Aniagwu, said that the government established three committees to interface with communities to ensure peaceful co-existence.

He added that the state reduced community clashes from what it used to have in the past through continuous interface with the communities.

“In some instances, we settle them and get them to play football and other games together and that has helped in a long way to get the communities to be more peaceful. Sometimes, you could have a few disagreements like the one you just mentioned but it doesn’t escalate to that level that we are used to in times past.’’

The commissioner said once any crisis broke out in any community, the committee would step in, address it and bring back reports to the governor in case there were others things that needed to be done.