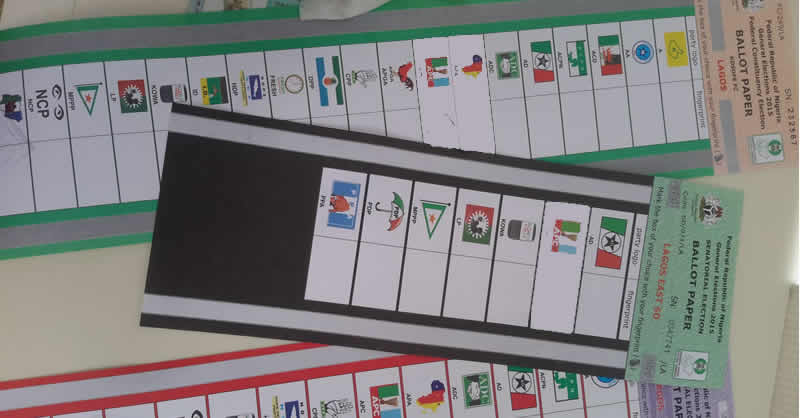 Nigerian printers under the Chartered Institute of Professional Printers of Nigeria have threatened to drag the Independent National Electoral Commission to court for allegedly printing a large chunk of its electoral materials overseas.

The agency said this was illegal and a violation of the CIPPON Act 24 of 2007 of the Federal Republic of Nigeria.

The council is charged with the duty of regulating, controlling, managing and administration of printers, the business of printing and other printing related-matters in Nigeria.

Speaking in an interview with The PUNCH on Thursday, the President of CIPPON, Mr Olugbemi Malomo, admitted that the electoral body had been awarding printing jobs to local printers, but he insisted that outsourcing contracting printing contracts to foreign firms was a violation of the law.

Malomo explained that by law, INEC was obligated to award the printing of all electoral materials, including ballot papers to local printers through CIPPON.

He cited Section 23b of the CIPPON Act, which states, “In regulating the registration of printing practitioners, the council ensures that no firm or partnership shall practise as printers in Nigeria unless it is registered by the council.’’

Malomo stated that there was an improvement in the awards of contracts to Nigerian printers after the CIPPON council visited the INEC Chairman, Mahmood Yakubu, in Abuja last year.

The CIPPON President said, “There was an increase in patronage of our members. To that extent, that advocacy was meaningful. The second point is what percentage were we able to get? We have not been able to collate that.

“Was there any percentage (in INEC printing jobs) that was taken out? Certainly, but we don’t know what percentage that was taken out. The next level of advocacy, we are thinking of doing and I want you to quote me on this; is that we need to approach a court to interpret the law because the Act that established us says, ‘If you are not our member, you can’t get a printing job in Nigeria.’

“But we are aware that they patronise people who are not our members, so, we will eventually seek an interpretation of that (in court). But by and large, more people are patronised but we can’t say at what level or how many people were patronised.

“But with the help of the fourth estate of the realm (the media) and for the benefit of all Nigerians, we all need to work together. People are taking the jobs out of the country and I can tell you it is not because of lack of capacity, it is because of other interests.’’

Responding to insinuations that Nigerian firms may not possess the capacity to deliver the job on time at the required time, Malomo argued that ballot papers had been demystified by the transition to electronic voting.

Stressing that no single company could deliver the quantum of ballot papers and other material needed for the election, he said the excuse of lack of capacity usually levelled against Nigerian printers had also been eliminated by the amended Electoral Act, which had given INEC adequate time to prepare for elections.

He noted, “About four, five elections we have had. I’m not talking about presidential elections; election has moved away from ballot papers to card readers and electronic voting. The election is now one man, one vote.

“In other words, people who were compromising ballot papers, even if you give them a million ballot papers now, it doesn’t count anymore. So, when you talk about capacity, there is no single printing company in the world that can take up this (INEC) job at the required time.

“Capacity is also a function of time. The Electoral Act was also amended to give more time for printing. So, the excuse of lack of capacity has also been reduced or eliminated.

“INEC is one of the biggest users of paper, in particular, this election. We held a paper conference so that the issues of paper can be addressed so that we can use locally produced paper. How can we talk about capacity when the biggest spender is not even interested in an Olympic solution to the challenges it is having? Rather, it is taking the easy way out by going abroad because somebody is going to make more dollars.’’

The council president said money should be spent to develop local capacity as is the practice in developed countries.

“The American government will give you some grants and ask you to spend them on your company because they know what they are doing. That is why we have this post-election session a few years ago to talk about the future and learn a lot of lessons,’’ he submitted.

Meanwhile, the Secretary General of the Abuja Printers’ Forum, Bissala Bello, said six local printers had been engaged by INEC to print ballot papers for the coming polls.

According to him, four are in Abuja and two are in Lagos.

Commenting on CIPPON’s threat, the Spokesman for the Labour Party Presidential Campaign Council, Tanko Yunusa said there was nothing wrong with the INEC’s decision to print ballot papers for use in the 2023 election outside the shores of the country, provided the law does not forbid the commission from doing so.

Yunusa said, “Except they point out the exact provision of the law that forbids INEC from printing electoral materials abroad, we can’t react formally. But I think the commission is at liberty to do whatever will assist it in bringing about free, fair and credible elections.

Meanwhile, INEC has said that an oath of loyalty and neutrality will be administered on all policemen and other security personnel that will be deployed in the next month’s general election in line with the Electoral Act, 2022.

According to the commission, such security officials will also, under oath, swear not to collect bribes or gratification and that they will carry out their electoral tasks in the interest of the country.

The INEC Resident Electoral Commissioner in charge of Bayelsa State, Emmanuel Hart, stated this while delivering a paper entitled, “The Electoral Act and the Role of Police on Election Duty” at a workshop on management of election management in Yenagoa on Thursday.

The workshop with the theme, “Empowering Police Officers for Effective Management of Elections”, was organised by the Bayelsa State Police Command in partnership with the Bosinde Araikpe Global Peace Initiative.

Hart, who was represented by the Head of Legal Services at the state INEC office, Ayi Obaseki, disclosed that any officer who contravened the law as contained in sections 26 and 120 of the Electoral Act would be slammed with a maximum fine of N500,000 or imprisoned for 12 months or both, upon conviction.

Quoting the relevant sections of the electoral law, he said: “It is mandatory for security officials taking part in the conduct of an election to affirm or swear to an oath of loyalty and neutrality that they will not accept bribe or gratification and that they will perform their functions and duties as well as discharge same in the interest of the Federal Republic of Nigeria without fear or favour.

“Any officer who violates the provision of Section 26 (1) of the Electoral Act commits an offence of Dereliction of Duty and liable on conviction to a maximum fine of N500,000 or imprisonment of 12 months or both.”

The REC stressed that the new Electoral Act 2023 strengthened Nigeria’s electoral process and the statutory role of the police before, during and after the conduct of elections.

He said the role of the police as the leading security agency in the electoral process was beyond voting and other activities that would take place on election day.

Hart stated, “The most crucial and fundamental element in the duty of the Police Force is the protection of life and property of the citizens.

“As we move towards the 2023 general elections, it is important that you use your good offices to prevent electoral violence caused by political thugs in voting centres. Where there is widespread violence in the state, the commission may not go ahead with the conduct of election,” he said.

In his remarks, the Commissioner of Police, Ben Okolo, said the workshop was necessary to sensitise officers and stakeholders on the need to ensure violence-free and transparent polls and refresh their minds on ways to conduct themselves and manage electoral activities.

He said, “This is a very important process. We are going to do this and other activities to ensure that our officers will stick to the promise that the President of the Federal Republic of Nigeria, Muhammadu Buhari, has made, that this election will be free, fair and credible; and the process will be transparent.

“To ensure that that happens, we want to begin to sensitise the people and other stakeholders.”

Deputy National Publicity Secretary of the PDP, Ibrahim Abdullahi, in an interview with one of our correspondents, said something was wrong with the figure.

In the register, men outnumber women.

The PDP’s deputy spokesperson noted, “I am not in agreement with that revelation. There is no way women will be fewer than men in terms of registration, participation and active involvement in politics. Women have over the years proven that they are more in strength, more in population.

“So, INEC is not sincere, I am not in agreement with that and I don’t think the majority of Nigerians will agree with that.”

But the factional National Publicity Secretary of the SDP, Alfa Muhammad, pointed out that “there is an improvement when you compare it to the previous one. That you have more men is probably is because of youth involvement these days.  The increase in number is as a result of the more sensitisation and determination of youths to participate this time around.’’

He added, “We also pray that the people base their choice of candidate on merit, and the capacity to deliver. It will be fruitless efforts if people vote based on religious or tribal sentiment. That will not help the country.

“What we need now is a leader who is experienced, who will not be using the first four years to learn how to operate, a leader who is visionary and knows the way to push his vision to reality.’’

Corroborating the SDP, National Publicity Secretary of the New Nigerian Peoples Party, Major Agbor, observed that the figures were okay because they were signs that Nigeria’s democracy is maturing.

“Before now, it used to be the women than the men, now we have more men than women. Is an indication that the people are becoming more conscious, and more aware,’’ he said.