The National Executive Committee of the All Progressives Grand Alliance, on Friday, appointed the Anambra State Governor, Professor Chukwuma Soludo, as the party’s national leader.

Members of the party’s NEC unanimously appointed the governor as APGA’s national leader during its meeting held at the International Convention Centre in Awka, Anambra State.

This is according to a press statement titled, ‘Soludo takes charge, appointed national leader of APGA by the National Executive Committee of the Party’, released on Friday.

The statement added that a certificate of appointment was presented to Soludo by the national chairman of the Party, Victor Oye, in the presence of all the NEC members after his appointment. 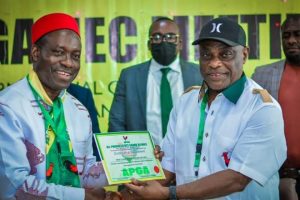 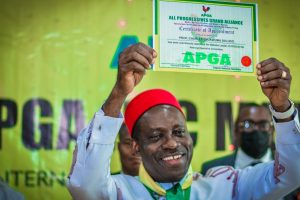 Receiving the certificate, Soludo said he felt the weight of his forebears with the appointment, adding that he was honoured to be the third leader of the party, after the late Biafra leader, Chukwuemeka Ojukwu, and his (Soludo’s) predecessor, Willie Obiano, as the first and the second respectively.

“This has humbled me! I’m feeling the weight of history right now. The APGA is a coalition of all progressives. I feel the weight of our forebearers and those who have sacrificed their lives to ensure the survival of this great party.

“There was a grand progressive alliance in the first and second republics that included the UPN, RPP, NPP, and others.

“All of the progressives are dispersed throughout this republic. APGA is a 21-year-old political party that was the first to be registered with the word ‘progressives’ in its name.

“All progressives call APGA home. It’s a history with two leaders, and I’m honored to be the third.

“I must pay tribute to my predecessors, Late Sir Chukwuemeka Ojukwu of blessed memory, the first National Leader of APGA; Chief Willie Obiano, my immediate predecessor as the APGA’s second leader, and here I am.

The former governor of the Central Bank of Nigeria pledged to work towards ensuring that “all progressives in Nigeria” know APGA, which he claimed was the third largest political party in the country, as their home.

He said, “I pledge to work every day with all of you, our thronging members, so that all progressives in Nigeria will know that APGA is their home.

“APGA is the third largest political party in Nigeria and will grow from strength to strength. When the country is ready, APGA will be there to provide the true progressivism that Nigeria craves.”

“We have a responsibility to work very hard to maintain and expand our pace.”

“This great party has my personal commitment. I came to this platform after many thoughtful years, and I read the party’s constitution and manifesto. It is the first political party to pledge support for true federalism.

“APGA is still the road map to a better Nigeria. I will uphold this party’s principles and ethics,” Soludo further stated.

The Anambra State governor added that APGA’s policies were centred on the people, stating that the party did not discriminate in its appointments, and boasting that, “We increased employees pay by 10%. This is a pro-people government because that is who we are. We leave no one behind, which is why we are progressives who care about people.

“We are working on power to provide 24 hours power. We’re getting started. People will have access to high-speed Wi-Fi and Internet, thanks to the installation of 2000 kilometres of fibre optic cables.”

The new party national leader also boasted that, “APGA will win in the coming months”, adding that, “and then the real work will begin. We will run for every office in the country and, by God’s grace, we will win.”

The governor commended the party’s “outstanding leadership”, which, according to him, had “demonstrated will benefit future generations of APGA supporters. We must work hard to preserve our party’s name and greatness.”

Earlier, while welcoming members and stakeholders to the APGA’s first NEC meeting of the year, the national chairman of the party, Oye, expressed his joy and gratitude to Governor Soludo for allowing him to witness the momentum in the state.

“Anambra State is synonymous with development, and we pray to God to keep its leadership in place,” Ozonkpu said.

“All our State Chairmen from 36 states of the country and BOT Chairmen are all represented here.

“Our party has made tremendous progress, and all of the goals we set for 2022 have been met. We met the criteria for uploading data from ward to national level APGA candidates, produced a list of officers, and completed the exercise in 21 days.

“APGA was the first political party to meet the INEC deadline prior to the opening of our functional ICT center with 55 ports in 2019.

“I can monitor the uploading of party agents in real time on my phone,” he explained.

“In 2021, we held our primaries in Awka on June 21st, and Governor Soludo emerged as the APGA Candidate and went on to win the Governorship election, and he is now seated here with us as the Governor of Anambra State.

“I’ve always said that no one can curse someone whom God has blessed. Governor Soludo is a visionary leader, and God Almighty will keep him alive so that he can complete his mission on Earth,” he added.