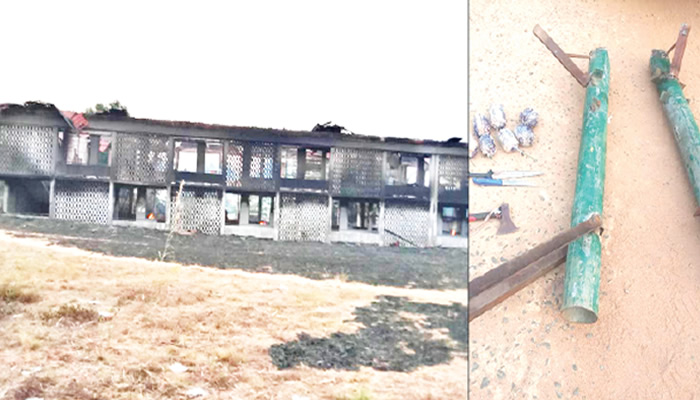 Some yet-to-be-identified gunmen have attacked men of the Anambra Vigilante Service in the Ihiala Local Government Area of the state, killing four of the operatives.

PUNCH Metro gathered that the assailants, who stormed the area around 2am on Thursday, also set five buildings ablaze.

A source said one of the burnt buildings belonged to the State Independent National Electoral Commission.

The source said the hoodlums, after killing the vigilantes at the local government secretariat, beheaded one of them and took his head away.

He noted that the hoodlums used improvised explosive device to burn down the buildings.

A community leader, Innocent Ozuru, said the incident created panic, as the corpses of the victims littered the road and caused gridlock before the police cleared the scene.

He said, “Ihiala community has been under siege in recent times and it is just a pity that security operatives have not matched their words with action. For example, Ihiala is a border town with many thick forests, which have become a nest for these criminals. What will it cost those in authority to start clearing these forests and converting them into more productive uses?

“People are fleeing their ancestral homes in droves; for how long will this continue in a country where there is government? Our local government headquarters has been destroyed and these hoodlums have continued to unleash terror without looking back.”

The reason for the attack could not be ascertained as of the time of filing this report.

The state police spokesman, DSP Tochukwu Ikenga, confirmed the incident, adding that the police killed one of the hoodlums.

He said, “Following the police/military operations ongoing in Ihiala and its neighbouring town, operatives responded to a distress call around 2.55am, today, January 12, 2023, of an attack on Ihiala local government headquarters.

“The attackers had already murdered three vigilantes on duty, beheaded one and set five buildings ablaze with IED and petrol bombs.

“The joint force operatives engaged the arsonists/attackers, and obstructed them from causing further damage, while some escaped with bullet wounds.

“The bodies of the victims were recovered and joint operations are still ongoing. Further development shall be communicated, please.”