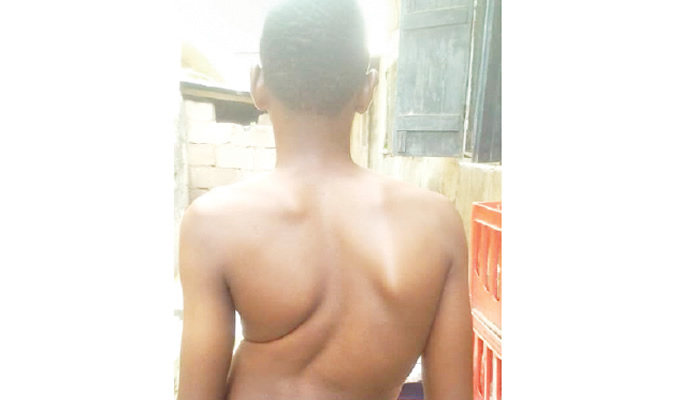 The family of a 15-year-old boy, Emmanuel Adelaja, who was diagnosed with a spine condition, Adolescent Idiopathic Scoliosis, have sought the help of Nigerians for surgery.

PUNCH Metro gathered that the deformity, which started a year ago, was first detected when his parents noticed that his walking posture was abnormal.

His father, Gbenga, who spoke to our correspondent, said the family was later informed by doctors that the problem had got worse and Emmanuel needed surgery.

He said, “Initially, we saw him bending but we didn’t understand it. I thought it was a walking style for him and I even corrected him about it. However, after a few months, we discovered that it was actually a deformity and we began to take necessary steps.

“We first took him to those who traditionally work on bones because we thought he fell and all that was needed was to straighten the bone. But for months he kept complaining of acute pain and couldn’t walk straight anymore. In the process of going here and there, we later discovered that it was a medical condition, we then visited a hospital.

“We found out that it was scoliosis; a doctor told us that his condition was 90 per cent worse and could only be corrected by spinal surgery.”

The boy’s mother, Kehinde, who left her job to tend to him at home, lamented the depression her son was passing through as she appealed to the public for help.

She said, “My son can no longer walk because of the severe pain he feels all the time. We cannot afford the cost of the surgery. Nigerians, please help me out of this so that my son will be saved from social embarrassment.”

It read in part, “The above-named 15-year-old has been diagnosed with Adolescent Idiopathic Scoliosis. In view of the magnitude of the deformity, he will benefit from staged spinal surgery to realign the spine and halt the progression of the deformity.”

The surgery cost was estimated by the hospital at N4.7m.