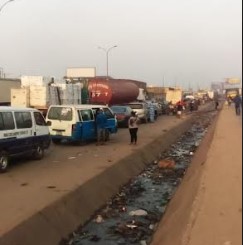 The drivers said they were protesting against the state government tax imposition on trailers, lorries, truck,s and other vehicles bringing goods into Anambra.

The protest which started in the early hours of Friday led to a total lockdown of the bridge as well as the Enugu-Onitsha, Onitsha- Owerri expressway and all the roads that lead into and exit Anambra through Onitsha.

The situation rendered commuters stranded and forced some people to come down from their vehicles and started trekking.

While stating the reason for their action, the drivers lamented that the state government had imposed a levy of N30,000 for trailers loading and offloading goods in the state, while other vehicles have their own amount ranging from N20,000 to N25,000.

A driver, identified as Odion Omoroge, who spoke on behalf of the aggrieved members, expressed surprise about the levy, describing the action by the government “as the worst the people of the state will see.”

He said, “Violence about the collection of money by the government revenue collectors is being witnessed daily in Anambra state, particularly in Onitsha. Violence is more pronounced now than ever before, yet the same government said it does not want touts, yet touts are having a field day on the roads on a daily basis.”

Although, the police were on the ground preventing a breakdown of law and order, but the aggrieved drivers were undaunted even as commuters battled to pass through the roads.

The Anambra Police Command’s spokesman, Tochukwu Ikenga, could not be reached as calls and messages to his telephone line were not responded to