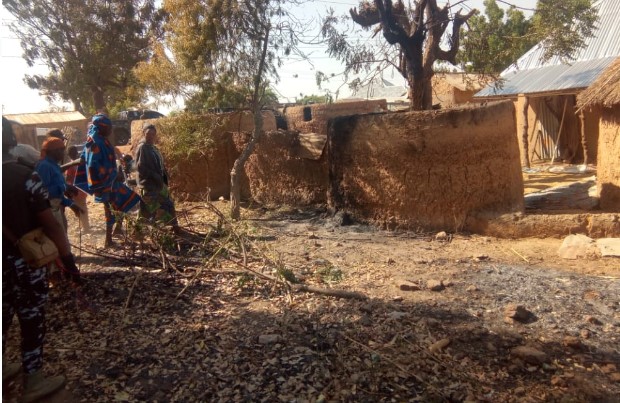 No fewer than three persons have been confirmed dead following Thursday’s invasion by bandits in Amtawalam and Pobawure Communities of Billiri Local Government Area of Gombe State.

Speaking during an assessment visit at the scene of the incident on Friday, Gombe State Governor, Muhammadu Yahaya, decried the killings and destruction of food items.

The governor described the assailants as ‘bandits and cattle rustlers’, stressing that actions capable of causing chaos would not be tolerated by his government.

According to Yahaya, the attack could be a spiral effect of acts of violence in Plateau and Bauchi States.

“We came to see for ourselves the level of destruction and lives lost as a result of the attack by bandits, cattle rustlers in these two communities Amtawalam and Pobawure.

“It’s really very disheartening because of the peaceful nature of our place and we have been living in peace. It seems like a spiral effect of the activities of bandits in Bauchi and Plateau states that are coming to our state Gombe,” Yahaya said.

He disclosed that he had ordered for the immediate establishment of a police outpost while harping on the importance of community participation in maintaining security.

He added, “I have directed for setting up of police outpost with relevant of security agencies to come and enforce security, law, and order in this place and I will make sure by the grace of God that we take necessary steps to safeguard lives and property of the people knowing full well Gombe is a peaceful state.”

“Community policing is of the essence. We will ensure community policing takes place not only here but the entire state, knowing full well we have our outfits like GOSTEC, the vigilante and other agencies, we shall all join hands and we shall succeed.”

On his part, Commissioner of Police, Oqua Etim, revealed that the bandits came to destroy farm produces, adding “they came specially to destroy their farm produce and they did not steal anything. We are on top of the situation that is why we are here the moment his excellency got the news he gave directives that we are on the ground and ensure law and order in the place.”

Etim disclosed that the attack was devoid of politics, stressing that it was mere criminality that the command alongside other security agencies would not allow festering.

He said, “This has nothing to do with politics. So we should divorce politics from criminality and politics is going on smoothly. Three causalities; a 90-year-old man was burnt with his two other young persons were savagely killed and we have recorded two to three injured.”