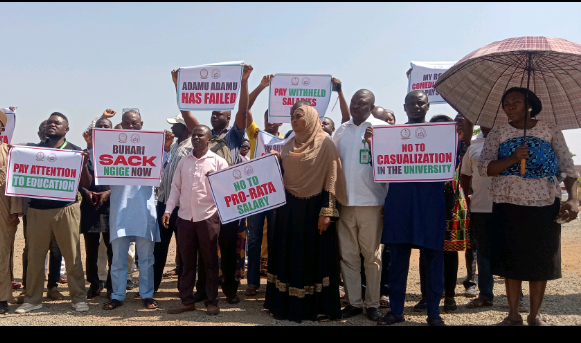 Following the crisis between the Academic Staff Union of Universities and the Federal Government of Nigeria, members of ASUU at the Federal University, Lafia, Nasarawa state, Friday, staged a peaceful protest in the school premises and called for the immediate sack of the Minister of Labour and Employment, Chris Ngige.

The ASUU FuLafia members earlier held a one-hour congress where the decision was reached to embark on the protest.

Speaking during the demonstration, Chairman of ASUU in the institution, Adam Abdullahi, said they decided to organise the peaceful protest to demand for Ngige’s sack because they were paid half-salaries for the month of October.

He lamented the minister’s refusal to pay them their eight months outstanding salaries since the union embarked on strike in the month of February.

Abdullahi warned that if the current crisis between the FG and the national body of the union is not urgently resolved, it could cause a bleak future for the Nigerian youths.

He said, “The reason for this protest is to tell the Federal Government to sack the Minister of Labour and Employment, Chris Ngige, for his handling of the ASUU strike and the effect of that strike on the Nigerian educational system. The protest is also to tell the FG to pay us our withheld salaries.

“The Minister of Education has also failed. They paid us pro-rata and we are not casual workers. Pro-rata is the casualisation of the University workforce, and we are saying No to this.

“The government should listen to our (ASUU) demands and grant our request. The demands that we put on the table before the strike are still on, none of them have been met.

“Anytime it was due for the government to pay, instead of paying, they create an emergency and we are saying No to this. So because of all these, academic activities in the institution will be grounded for today and we may continue if nothing is done about our demands.”

Our correspondent reports that the ASUU FuLafia members carried placards with several inscriptions which include; ‘Buhari Sack Ngige Now’, ‘Adamu Adamu Has Failed’, ‘No To Pro-Rata Salary’, ‘Pay Attention To Education’, ‘Pay Withheld Salaries’, among others.

One of the students of the University who spoke on behalf of the others, Muhammed Musa, expressed great concerns on the lingering crisis between the FG and ASUU, and appealed that the issues should be resolved as soon as possible in order for them to continue their studies without any hitches.