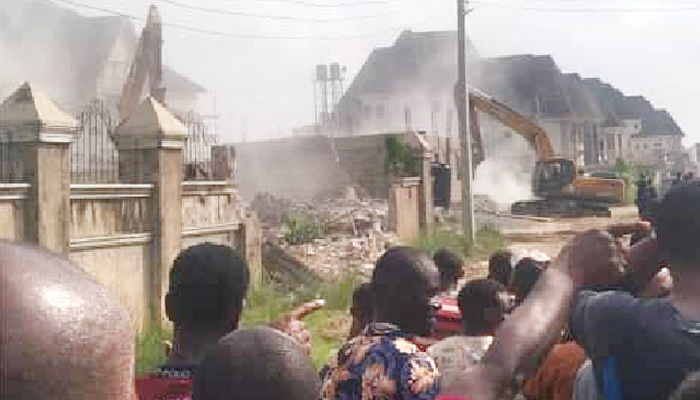 The Ado royal family of Abule Ado has filed an injunction before the Badagry High Court, Lagos State, after officials of the Federal Housing Authority, among others, allegedly demolished buildings on land in FESTAC Town, in the Amuwo Odofin Local Government Area of the state.

The family members said the government officials carried out the demolition despite a pending case before the court.

PUNCH Metro gathered from members of the family that the federal government acquired parts of the land in Abule Ado to build the FESTAC town in 1974.

It was learnt that the family members and officials of the federal agency had been in dispute over the remaining parts of the land.

The situation prompted the Alado of Ado Kingdom, Oba Lateef Ado, alongside other members of the royal family to sue the FHA to the Badagry High Court in October 2021.

Addressing the press last Thursday, the family’s secretary, Adesina Ado, said a case to determine the rightful owner of the remaining parts of the land under contention was still in court when the government officials demolished structures on the land.

He said, “After FESTAC land was given, we noticed encroachment as they started allocating the remaining land to people. They didn’t even pay compensation for the land they acquired for FESTAC. In 2014, we noticed that they published a gazette saying they were allocating land to build residential houses.

“We called our surveyor to chart the land and study the gazette and we discovered that it was on only the land for FESTAC that was in the agreement but they had encroached on other areas of the land. We sued them to court in 2021.

“But between November and December 2021, we discovered that they started demolishing people’s houses. Those we sold the land to have been complaining of property destruction. They also said some persons were demanding N2m fee before they can have access to the land.”

The family’s lawyer, Samuel Honvu, said he informed the court that the respondents had demolished residential property on the disputed land, adding that the judge, Hon. Justice Obafemi Adamson, requested that a formal notice explaining the allegations be submitted at the next adjourned date on November 29.

Contacted, the spokesperson for the FHA, Kenneth Chigelu, said the land belongs to the agency, adding that the demolition was to prevent building collapse.

He said, “We have carried out the demolition before now. The land they are claiming does not belong to them. You can go to the state secretariat at Alausa and chart the area. That land is federal government land. The layout of that area belongs to the FHA.

“People started selling the land illegally because they are land grabbers. Most of the estates you see there have come to us to beg that they want to be integrated. As I talk to you, people are still building on the land illegally. All these are causing building collapse because they don’t have drainage. We have marked the buildings so the builders can stop work.”