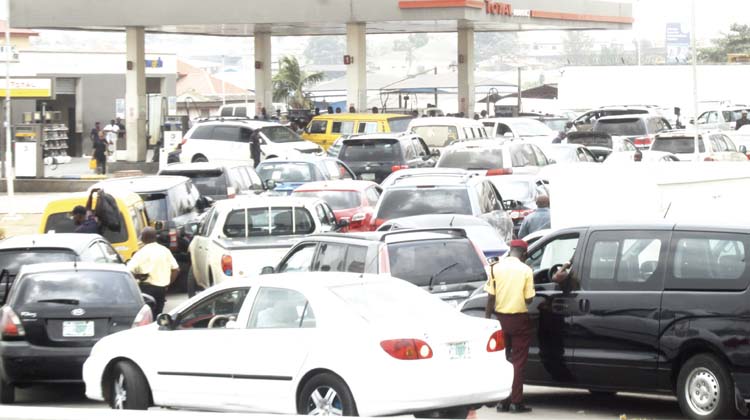 The scarcity of the premium motor spirit, popularly called petrol, has continued to spread across many states, resurfacing in Abuja on Wednesday after disappearing briefly.

It grew worse in Lagos, Ogun, Ekiti, among others.

Oil marketers blamed this on the 163 per cent hike in the cost of renting daughter vessels to move products from mother vessels, stressing that this had reduced the purchasing power of many dealers.

They also attributed the scarcity to a drop in PMS supply by the Nigerian National Petroleum Company Limited, the inability to access foreign exchange at the official rate, and the continued subsidy on PMS, among others.

The PUNCH reported on Wednesday that long queues surfaced in Lagos on Tuesday as motorists spent hours at filling stations in their bid to purchase PMS.

Commenting on this, the National Public Relations Officer, Independent Petroleum Marketers Association of Nigeria, Chief Ukadike Chinedu, said the situation was due to various factors.

He said, “Talking about Lagos, that is where most of the (PMS) vessels come. When the mother vessel comes into Lagos, its products will be distributed by daughter vessels to ports in Lagos, Warri, Port Harcourt, etc.

“These daughter vessels are hired by independent private tank farm owners or private depot owners, who pay vessel charges in dollars. Some of them source dollars in the open market. So, the dollar also determines the price of products.

Ukadike added, “The rate to charter daughter vessels to move products from the mother vessel to the PDOs has jumped within months due to issues around the hike in diesel cost, foreign exchange concerns and other industry problems.

“The products are moved to PDOs in Port Harcourt, Warri, Calabar, Lagos, etc, and by the time NNPC gives depots allocations, it becomes their responsibility to charter vessels that will take the products from the mother vessel to the depots.

“So, that lack of purchasing power in terms of sourcing dollars to evacuate products from the mother vessel and that little period that the NNPC cannot cope with will continue to bring in ghost scarcity.”

He explained that the absence of vessels to move products due to the hike in hiring cost was also contributing to the ghost scarcity of PMS across states.

“Ghost scarcity means scarcity that appears and disappears. You might be going to work in the morning and everywhere will be clear, but in the evening you will see queues,” Ukadike stated.

The IPMAN official said the NNPC was currently finding it tough to continue subsidising PMS.

“The least that NNPC can sell petrol is over N400/litre to depots and not at N145/litre, but because of subsidy, which is becoming over-bearing on them, the oil firm has been struggling to subsidise,” he stated.

He added, “That is why you see the lapses. The government is looking for dollars to import this product and pay the contractors importing for NNPC and it is also trying to subsidise PMS.”

Ukadike explained that the landing cost of PMS in Nigeria was about N450/litre, as he noted that subsidy on PMS was no longer sustainable.

“The government will not continue to be Father Christmas and cripple the economy. Subsidy must stop,” he stated.

He said members of the National Executive Council of IPMAN were meeting in Abuja to further discuss measures to address the lingering concern in the downstream oil sector.

Ukadike, however, stated that the association had repeatedly made it known that the sure solution to this crisis was to get Nigeria’s refineries working, as the country could not sustain PMS imports and its continued subsidy.

“We urge the government to make the revamp of Nigeria’s refineries a reality. It is really taking too long. That is the major and fastest solution to this incessant crisis in the downstream,” he stated.

Amid the biting fuel scarcity across the country, top officials of the NNPC met oil marketers with a view to tackling the problem.

A source close to the matter hinted The PUNCH that the NNPCL had an operational meeting with marketers in order to ensure that products were effectively distributed across the country.

The PUNCH learnt it was a logistics meeting to ensure adequate distribution of products to stations across the country.

MOMAN members would be working late and at weekends to bridge product supply gaps, a source said.

The source added, “Normally, when people see queues like this, they do panic buying. So, if you have small fuel in your tank, don’t go and queue up. Manage it until one or two days because the queues will clear. We are receiving products and before weekend, the queues would have cleared,” he said, adding that MOMAN was pushing out more products than it normally did.

Meanwhile, oil marketers have assured that fuel queues currently being witnessed, especially in Lagos, would disappear before the weekend.

In a telephone chat with The PUNCH on Wednesday, spokesperson for the Major Oil Marketers Association of Nigeria, Clement Isong, said the scarcity was a logistics issue as a result of delay at receiving products from offshore to onshore at the port.

He however said the logistics challenge had been resolved and members were currently trucking out products.

However, the National Controller Operations for the Independent Petroleum Marketers Association of Nigeria, Mike Osatuyi, told The PUNCH that there was no product supply to its members.

“There’s no supply for now. Depots don’t have fuel, but we heard that they are expecting the product. They said vessel is coming but it’s yet to come,” he said.

According to him, few members of the association that had products at their filling stations bought at N205 at the depots on Tuesday and Wednesday.

“We bought at N205, and if you add N8 transportation to it, price would go up to like N213. We bought yesterday and today. But now, no products,” he said.

He alleged that NNPCL was not providing its members with products like they did to MOMAN members.

“They don’t give IPMAN fuel, only MONAN. We buy from third parties. We buy from DAPPMAN, and we have no choice. Is there anything wrong in giving us our own depot where our members will go and buy so that the product can be cheaper? We should be buying at N148 and not at N205. Whatever we buy is what we sell. MOMAN currently has products although at low quantity,” he said.

Spokesperson for the Depot Association of Petroleum Products Marketers of Nigeria, Olufemi Adewole, did not respond to calls put through to him by The PUNCH.

Commuters were also hard hit by the situation. At Oyingbo and Bariga axes in Lagos State on Wednesday, commuters and drivers alike lamented the hike in transport fares.

The Mobil filling station around Oyingbo area of the state had a long queue of vehicles, tricycles and motorcycles waiting to buy petrol at N200/litre.

A bus driver plying the Oyingbo to Bariga axis, Ade Toluwanimi, told our correspondent that the hike in transport fare from N150 to N300 was because of the rise in the fuel price.

He said, “ I do not like the rise in transport fare, but it is not our fault. Fuel is now N200 per litre and we do not know what will happen next. They might increase it anytime. “

A motorist, Aniocha Stephen, said he had been waiting for a while at the filling station only to be told that they had stopped selling in kegs.

“I have been here for the past one hour but they would not even sell in keg unless you give them N50 depending on the liter you want to buy.

“Some have even been jumping the queue, forcing attendants to sell to them while reselling to people in black market for a higher price.

“The queue is already slowing down the movement of other vehicles passing through the road. This is Lagos for you.”

A woman, Benita Mmeri, who was waiting for a bus around the Bariga axis, also lamented the hike in transport fare.

She said, “I see a lot of women walking down the end of this bus stop just to see if the drivers can carry them for a lesser fare.”