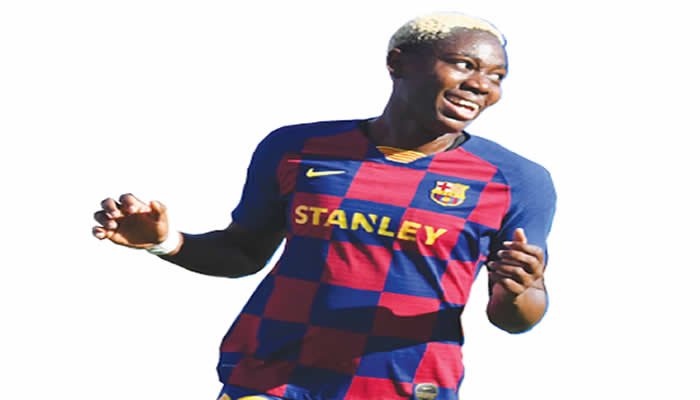 Super Falcons star, Asisat Oshoala, continues her impressive form this season and was among the goalscorers as Barcelona Femení thrashed Deportivo Alaves 8-0 in their Spanish Iberdrola clash on Sunday, PUNCH Sports Extra reports.

Claudia Pina broke the deadlock in the seventh minute after taking a great touch from a Paredes pass, before shooting left-footed into the far corner.

Oshoala scored the second after a lovely pass by Mapi Leon put in Rolfö down the left, who dropped the ball on the striker’s head.

Pina then provided a superb pass for the third for Rölfo to score through Patri Larqué’s legs after 24 minutes.

The 21-year-old forward carried on her wonderful afternoon by scoring a penalty to make it 4-0, and in her 200th game for Barça, Mapi León scored with a powerful shot from outside the area to make it 5-0 at halftime.

In the second half, Salma Paralluelo got her goal to compound the visitors’ woes.

Conscious of the lead and the upcoming CL game, coach Jonatan Giráldez decided to make some substitutions, with Laia Codina returning after six weeks out and later, on 71 minutes, Bruna Vilamala made her long-awaited return after 392 days out due to a cruciate ligament injury.

There was still time for more goals, though, Crnogorcevic pulling away from her marker and scoring from inside the area to make it 7-0 with seven minutes to go before her fellow substitute Geyse collected Bruna Vilamala’s pass to score a left-footed low shot to make it 8-0.

Oshoala was in action for 90 minutes in the one-sided game.

The Nigerian has now scored three goals in nine league appearances for the Blaugrana this season and will hope to continue with her impressive form when Barcelona take on Bayern Munich in the Women’s Champions League at the Spotify Camp Nou on Thursday.