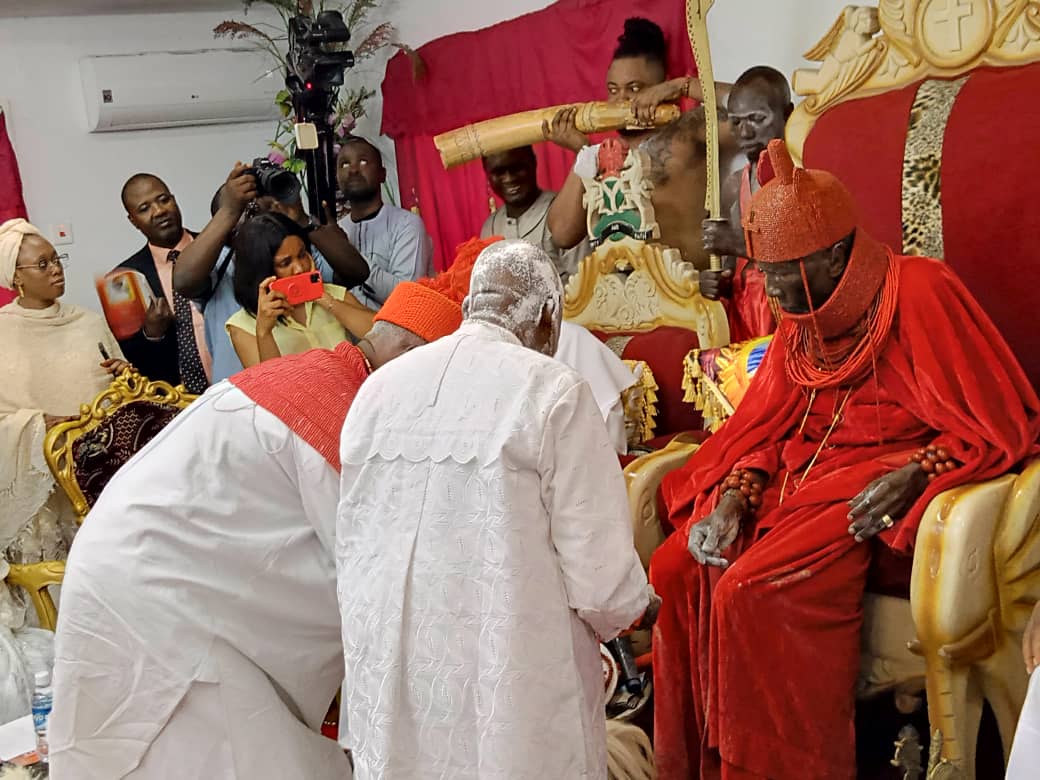 The monarch who doubles as the Chairman, Urhobo Traditional Council in Delta State conferred Governor Ganduje with the title of Olorogun Ejerukugbe of Olomu which literally means ‘Let’s work together’ while his wife’s Olorogun Omarmoraye of Olomu simply translates ‘Good woman’.

Palace sources disclosed that the event was specifically packaged to further strengthen unity between the South and Northern part of Nigeria and as well promote national integration.

Governor Ganduje, in his acceptance speech shortly after receiving his chieftaincy, described the moment as historic.

He said, “Today, history has been made, which is necessary for the development of our country. I could recall when the former head of state, General Yakubu Gowon created and implemented the National Youth Service Corps. It was a policy used to institutionalize national integration in Nigeria.

“Effectively, in 1973, I was a student at Ahmadu Bello University when the NYSC was introduced. Many of us who were students reacted negatively then.  But some of us who were young students, demonstrated in favour of the National Youth Service Corps not even knowing that it was a real policy to institutionalize national integration.

“Most of the time, we used to come to Warri, then the commercial capital of the Delta area.  It was so motivating. Many people were coming to see us as northerners, to pray for us, to greet us, some bringing various types of food to us free of charge. It was at that time I knew plantain, big banana. Some were bringing snails, goat and ‘Ukodo’.

“What you (the Olomu community) have done today is to further solidify and make that policy a reality in Nigeria. There is no doubt about this chieftaincy title.  There is a history behind it. When the late General Oneya was posted to Kano State to serve as military administrator after the demise of the former military administrator, Col. Mohamed Wasei, through an air crash, I was a Commissioner under Col. Mohamed Wasei. And when Oneya was posted to Kano to be a military administrator, he dissolved the cabinet but I was reinstated and we became so close because Oneya, we used to call him Abubaka, because Kano people loved him so much, became so friendly with us.  He was a very hard-working Chief executive.

“Late Gen. Oneya, and late General Obada were my mentors.  General Obada was the Minister of Works under Shehu Yar’Adua when he was head of state.  In order to keep the relationship up to date, I appointed the son of the late administrator as my Senior Special Assistant. And later in order to take the relationship to a higher level, I promoted him to Special Adviser in charge of Lagos Affairs.

“So your Royal Majesty, you can see how Nigeria can be promoted for national integration.

“On behalf of myself and my wife and the entire people of Kano State, we are very, very grateful for this coronation. I am happy that the interpretation of the title is ‘let us work together’. As far as I am concerned, it naturally means that ‘Nigerians are together as one’.

“It is natural in me that Nigerians must work together. We should be able to manage our differences to make us great because our differences are sources of our strength.  Every ethnic nationality in Nigeria has got inherent personality if properly harnessed and this will lead to the great nation.”

Governor Ganduje maintained that the title conferment on him by the Delta monarch has taken the national integration to a higher level saying it is important for Nigerians to believe in one another and trust themselves irrespective of religious differences, ethnic or geographic location.

According to him, “If Yoruba, Hausa and the Southern communities come together, there will be no differences”.

Engr Umar Ganduje, son of the Kano Governor, in his contribution stated that his father “has always been an agent of national integration”.

“That is just another thing to further cement the relationship,” he submitted.

Speaking in the same vein, Anthony Oneya, son of late General Dominic Oneya commended Ganduje for his open door policy for everyone and for extending hands of fellowship across the Niger noting that Ganduje appointed him as his Special Adviser in 2018.

“With this title, we have come to honour the Kano Governor for finding ways to unify Nigerians.

Also speaking,  Muhammad Garba, Kano State Commissioner for Information described the occasion as “an indication that Nigeria needs to be one”.

Garba said, “For the king to have invited the Governor and conferred the chieftaincy title on him, and for the Governor to have accepted is an indication that we should appreciate our diversity.

“Nigeria needs to stay together.  This is a signal for the people to know that we need one another, for people to progress.

“I am happy with the installation and hope that it will further facilitate the relationship between the North and South.

“Kings and other Governors should try as much as possible to integrate. You can see that all the ethnic nationalities we have in Kano send a representation. We also have representation of either an Adviser or Senior Special Assistant.  They are part of our government. That is why the King found our Governor worthwhile for the title.

“This coronation will further facilitate the relationship between the Urhobos and the entire people of Delta and Kano State. I assure you that this is the beginning of our relationship with the people of this area.”