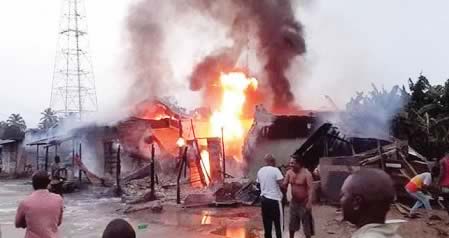 The early morning fire outbreak that gutted the popular Kano Singer market, on Tuesday, destroyed only four shops in the market.

The Public Relations Officer of the State Fire Service, Saminu Abdullahi, made the confirmation in a telephone interview with The PUNCH on Tuesday night.

He said contrary to some reports on the incident, only four shops were affected by the inferno.

According to him, the quick response of the fire service personnel prevented the fire from spreading to other parts of the market.

“We received a distress call from the traders that there was a fire outbreak in the market and our men were quickly mobilised to the scene of the incident.

“The quick intervention by our personnel had really saved the situation which would have been disastrous,” he said.

Abdullahi also added that there was no loss of life or anybody sustained injury during the incident.

“We thank the Almighty Allah that nobody sustained injury let alone lose a life during the incident.

On what the traders lost to the inferno, Abdullahi said it was not possible to quantify the loss until after an assessment of the damage caused by the inferno.

The Kano Singer market is the largest market in the North where essential commodities and other consumable products are sold.