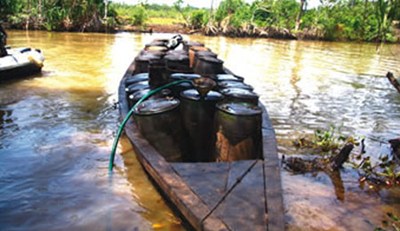 The Federal Government has expressed readiness to grant consular access to foreign countries whose citizens were arraigned in Port Harcourt, Rivers State, over attempted oil theft.

The foreigners were onboard the MT Heroic Idun vessel that evaded arrest and fled to Equatorial Guinea, where it was later arrested.

The Navy admitted that the vessel arrived at the Akpo field to lift crude oil within the field but had no chance to load before being accosted by the Nigerian Navy Ship Gongola at the terminal.

The super tanker was handed over to Nigeria on November 6 after two months of diplomatic negotiations.

Sixteen of the foreigners onboard were also arraigned for offences bordering on conspiracy, stealing, attempt to deal in crude oil, and false pretences.

Speaking during a joint briefing on the repatriation of the vessel at the Naval Headquarters in Abuja on Tuesday, the Minister of Foreign Affairs, Geoffrey Onyeama, said the Indian and Polish embassies had requested consular access.

Onyeama, who was represented by the Director of Legal and Consular Department, Nigerian Ministry of Foreign Affairs, Nicholas Ella,  said, “I’m aware of the diplomatic comatose regarding this matter which you stated earlier. I want to also stress and congratulate our mission in Equatorial Guinea for the work they have done. Of recent, we received requests from the Indian Embassy and the Polish Embassy for them to visit and I think more will come requesting consular access.

The Chief of Naval Staff, Vice Admiral Awwal Gambo, accused the owners of the vessel of peddling falsehood in the media to whip up sympathy from the international community.

Gambo, who was represented by the Chief of Plans and Policy, Rear Admiral Saidu Garba, said the vessel committed an offence against the Nigerian government for entering the restricted zone as well as accusing a Nigerian Navy Ship of piracy on International Maritime Reporting Platforms, among others.