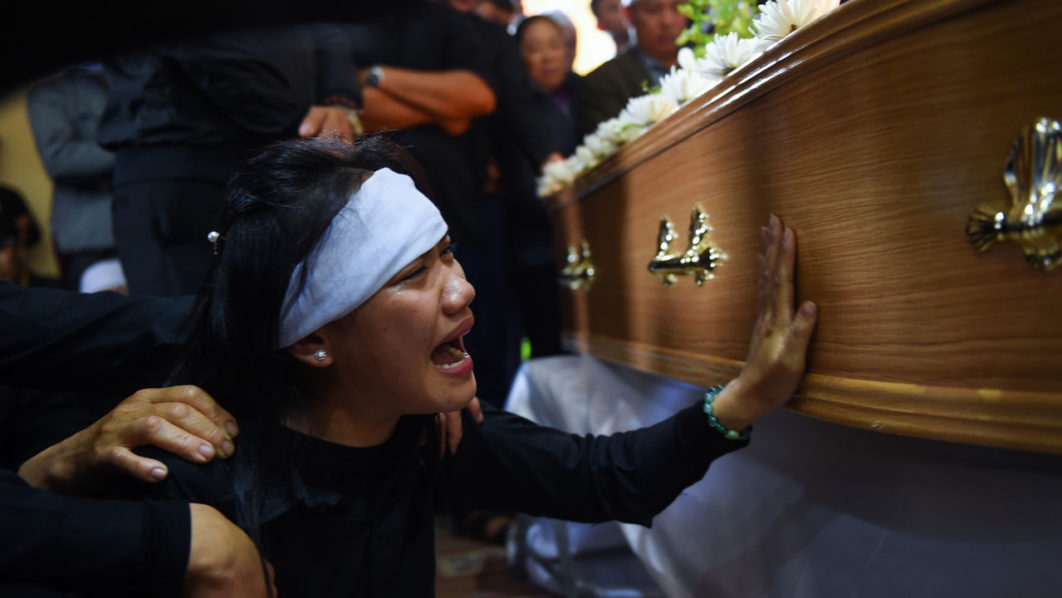 A family member cries before the coffin bearing the remains of Nguyen Van Hung during a funeral service at a church in Dien Chau district, Nghe An province on November 28, 2019. – The families of some of the 39 Vietnamese people found dead in a truck in Britain prepared for emotional burials for their children November 28 after an agonising weeks-long wait to bring their bodies home. (Photo by Nhac NGUYEN / AFP) /

The final remains of the 39 people found dead in a truck in Britain last month arrived in Vietnam Saturday, the foreign ministry said, returning them to bereft families after weeks of waiting.

The victims were among the 31 men and eight women discovered in a refrigerated lorry in Essex, east of London, on October 23 — all Vietnamese nationals who were illegal migrant workers.

The first 16 bodies were returned on Wednesday, with tearful relatives mobbing ambulances when they arrived in their hometowns.

On Saturday, “the bodies and ashes of 23 remaining victims… arrived in Noi Bai Airport in Hanoi,” announced the Ministry of Foreign Affairs.

Sixteen bodies and the ashes of seven victims were flown from London, state-run Vietnam News Agency reported, and they were immediately “delivered to their homeland by car”.

The victims hailed mostly from the central provinces, some of the country’s poorest, while some were from the north.

Families were given two options for repatriation: $1,800 to bring back ashes, or $2,900 for the cost of a coffin carrying the body.

Many chose to receive the bodies because they wanted to carry out traditional burial rites, and had to take out loans from the government to facilitate the return.

The father of Le Van Ha — who left behind a wife and two children for Europe in the hopes of a higher income to support them — told AFP Saturday that everything was prepared for his son’s return.

“I decided to receive his body back instead of ashes so that we could see him for the last time,” Le Minh Tuan said.

“Everyone is sad but finally my son will be back home.”

Several of the victims’ relatives told AFP they borrowed tens of thousands of dollars to pay for their relatives’ trips to Europe.

The central provinces have well-entrenched networks of brokers who facilitate the risky trips with the promise of well-paid jobs, though migrants typically end up working in nail bars or cannabis farms.

The brokers promised the 39 victims the truck route was safe and billed it as the “VIP route”, their families told AFP.

The Northern Irish driver of the truck, 25-year-old Maurice Robinson, pleaded guilty on Monday to conspiring to assist illegal immigration.

Several other people have been arrested in the UK over the incident, while Vietnam has held at least 10 people — though none have been formally charged.